Europe Confronts Coronavirus as Italy Battles an Eruption of Cases

Europe Confronts Coronavirus as Italy Battles an Eruption of Cases

If the virus spreads, the fundamental principle of open borders within much of Europe — so central to the identity of the bloc — will undergo a stress test, as will the vaunted but strained European public health systems, especially in countries that have undergone austerity measures.

Austrian officials stopped a train en route from Italy to Austria and Germany to test passengers for the virus. The Austrian interior minister, Karl Nehammer, said the tests came back negative so the train got the “all clear.”

In France, the new health minister, Olivier Veran, stressed the country’s preparedness, saying it would significantly ramp up its testing.

“There is a problematic situation at the door, in Italy, that we are watching with great attention,” he said on Sunday, adding that a Europe-wide discussion between health ministers was in the works.

On Sunday night, an aid ship bringing hundreds of migrants, who had been rescued off the coast of Libya, to a Sicilian port received instructions from the Italian government to remain in quarantine for 14 days as a precaution, according to the ship’s Twitter account.

The Trump administration has barred entry to the United States by most foreign nationals who have recently visited China, where the virus first appeared and spread. Much of the world has adopted similar controls, but the virus has continued to spread, most notably to South Korea, where more cases have been recorded than anywhere else outside China, and this past week to Iran, where eight deaths have been reported.

Israel on Monday will block entry to all nonresidents who have visited Japan and South Korea in the 14 days before their arrival. On Sunday, President Moon Jae-in of South Korea, which has 602 confirmed infections and six deaths, put the country on the highest possible alert, empowering the government to ban visitors from China and take other sweeping measures to contain the outbreak.

“The coming few days will be a critical time for us,” Mr. Moon said at an emergency meeting of government officials.

Coronavirus Map: Tracking the Spread of the Outbreak
The virus has infected more than 78,800 people in China and 28 other countries. 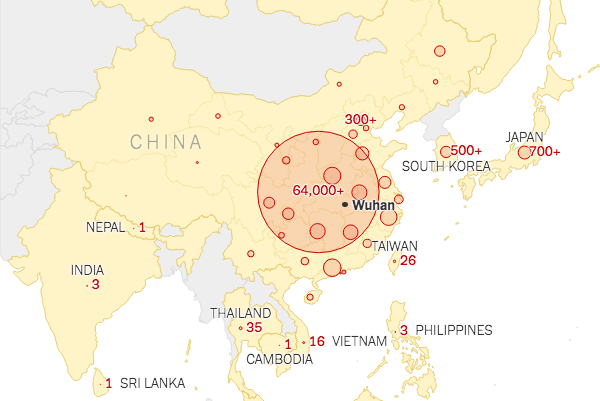 Even China — with an authoritarian government that has locked down areas with tens of millions of people in an attempt to stamp out the epidemic — has struggled to contain the virus, which has no known cure.

But the scores of new cases in Italy, mostly in the Lombardy region that includes densely populated Milan, present a new challenge for a country with a wobbly government often paralyzed by infighting.

That government has now become the reluctant laboratory to test whether the virus can be successfully contained in an open European society with a liberal approach to restrictions.

Prime Minister Giuseppe Conte of Italy said on Italian television on Sunday that the country had taken precautions, including barring flights from China in January. These measures seemed to have paid off “even if now it looks like it didn’t,” he said.

He suggested that the surge of Italian cases only reflected Italy’s casting a wider net in terms of testing.

“We cannot exclude that after tests that are equally rigorous, the numbers can go up in other countries,” Mr. Conte said.

Beatrice Lorenzin, a former Italian health minister, said the sharp rise in cases in Italy resulted from systematic checks that discovered a “second generation of contagion.”

She said this was probably caused by infected people who traveled to Italy from China using indirect flights without declaring their original departure point or putting themselves in voluntary quarantine during the virus’ incubation period.

“I hope similar things did not happen in other countries,” she said.

In the Lombardy region, which has reported the majority of cases in Italy, 10 towns were locked down after a cluster of cases emerged in the town of Codogno, about 60 kilometers southeast of Milan.

At least 50,000 people are affected by the lockdown. Residents were supposed to leave or enter the towns only with special permission.

The outbreak in Codogno was detected after a 38-year-old man was admitted to the city’s hospital and diagnosed with the virus on Thursday. But the man had developed symptoms perhaps five days before that, potentially allowing the virus to spread.

Health officials are trying to figure out how he contracted the virus; he had not been to China. Many cases in Lombardy, officials say, may be traceable to that one case.

At least five members of the hospital medical staff and several patients have been infected. Other persons who tested positive include the man’s pregnant wife, some friends, and others who spent time with them. The towns surrounding the ones where the man works and lives have been included in the shutdown.

On Sunday night on a road outside Casalpusterlengo, one of the locked-down towns, police officers in surgical masks waved down cars, asking what business they had in the town. The officers suggested that motorists take an alternate route and urged them against going any further.

Bahije Mounia, a 42-year-old caretaker from a nearby town who wore a surgical mask, turned right back around. She said the government should have let people in the area know how dangerous things were much earlier. With the spike of cases in the region, she said, “It’s almost like we’re in China.”

The exaggeration could be forgiven considering the dramatic turn of events in Italy in recent days.

What had seemed like a contained few cases spread throughout the country’s wealthy north. So did the precautions.

People wore surgical masks in Aosta, which is on the Swiss border. Officials in the Piedmont region closed schools in Turin, and Venice cut its Carnival short. The patriarch of Venice, the Reverend Francesco Moraglia, suspended all religious ceremonies, including Ash Wednesday celebrations that mark the beginning of Lent.

Two elderly people who tested positive for the coronavirus were in intensive care at Venice’s municipal hospital.

In the regional capital of Milan, officials closed museums, schools, its cathedral, and halted religious and cultural events. Many other venues, aside from those providing essential services, have been closed, including most bars and nightclubs.

Fears that the city could be quarantined triggered a run on supermarkets. By 5 p.m. on Sunday, at least one supermarket had run out of fruit, vegetables, meat and nearly all canned food.

Some of the customers wore masks, and they all seemed in a hurry to fill up their carts with whatever was left on the shelves.

Vanessa Maiocchi, 45, said she worried about getting her children enough food. She was also concerned that her brother, who has a weak immune system, might be more vulnerable, especially if his company kept making him go to work.

“At least in these cases,” she said, “the state should intervene.”

So far, the virus has killed three people in Italy, including a 78-year-old man from Veneto who died Friday; an elderly woman who died in Crema on Sunday; and a 77-year-old woman who died in her home in Casalpusterlengo and posthumously tested positive for the virus.

The Italian state, which leads the third largest economy in the eurozone, has not inspired much confidence of late, as it has been consumed by internal machinations. But health experts said they were more worried because the Italian health ministry appeared to have moved aggressively to prevent an outbreak, to no avail.

Francesco Passerini, the mayor of Codogno, said in an interview on Sunday evening that he still had not received concrete logistical instructions from Rome.

Two military structures in Lombardy are being prepared to become isolation camps. A military base in Rome has been housing evacuees from Wuhan, China, where the virus began, and the Italian passengers of the Diamond Princess, the cruise ship that has been under quarantine in Yokohama, Japan.

Lockdown procedures like the ones in Lombardy will be applied to other towns if new clusters emerge, officials said. Quarantine measures will also be applied to anyone who has close contact with someone who has the virus.

Elia Delmiglio, the mayor of Casalpusterlengo, said people continued going in and out of his town for most of the day on Sunday.

“We got the decree, but not a precise schedule for when it will be implemented,” he said.

But by late Sunday night, police began arriving to seal the town off.

“People are worried,” said Paolo Camia, a 55-year-old manager of a software company from Casalpusterlengo, who drove out of town in his blue surgical mask to take some pictures of the police checkpoints. “Basically, we can’t leave.”