What possibilities does the future hold for artist expression?

During the week of Frieze LA, visitors to RAS studio were able to see exactly that – a glimpse of tomorrow through the mind of a machine.

Inside the exhibition, powered by OLED technology, guests were able to gaze upon ethereal artworks which portrayed a machine-learning algorithm dreaming through millions of curated images.

It was a rare and spectacular visit, full of mesmerizing glimpses into the future provided by the pioneering media artist Refik Anadol.

Refik Anadol has been widely recognized for his stunning artwork, which turns massive data sets into abstract visualizations that draw viewers into a reality beyond our own. These award-winning artworks are unlike anything you’ve ever seen – because they’re a result of a groundbreaking process of human-machine collaboration.

However, for these collaborations to come to life, the Artist needed a canvas – and for that he chose the vivid color, breathtaking contrast, and cutting-edge performance of OLED.

“When I totally understood how amazing the OLED can be powerful for communicating data paintings, data sculptures, we also tried to find how can we also create better communication for our audience around the world”
– Refik Anadol

The works on display at RAS Studio are titled “Machine Hallucinations”, because they are created by peering into the mind of a machine-learning algorithm which processes millions of images and searches for connections between them.

Using the mesmerizing colors of the OLED as the canvas, these AI data paintings visualize the memories of a machine as it explores the connections between hundreds of millions of images.

Refik and his team curate and craft these learning experiences into intricate artworks through “data pigmentation”, an artistic process which he himself pioneered.

Though the team is composed of members from all around the world, Refik has chosen to nestle them close to the heart of Los Angeles, just a few miles away from Downtown, Arts District and Hollywood. It’s a decision that has enabled them to tap into the powerful artistic community of the city, and also provided a connection point for the technological leaders in Silicon Valley.

“I think LA has an incredible potential of creativity, like the cinema, performing arts, entertainment and many more, and being close to the Silicon Valley allows me and our studio to connect with the leaders in technology, people changing the world with algorithms, data, hardware, and software.”
– Refik Anadol

Crossing the threshold into the studio, visitors are greeted by a striking 77” OLED display featuring an intricate data painting that explores images of space. The dancing pixels portray the visual associations of an algorithm dreaming through images from 3 separate space telescopes – ISS, Mars, and Hubble.

“These are […] called satellite dreams, specifically looking at the world, our earth from satellites. We are watching an AI dreaming landscapes, mountains and where the land and the water connect.”
– Refik Anadol

The exhibition, which was powered by OLED technology, featured an astonishing collection of Refiks data paintings – each displaying the mind of a machine pondering a different aspect of our universe.

On a series of vertically oriented triptychs, visitors gaze upon dreams of flowers, forests, and even the vastness of space with breathtaking color and clarity.

The experience of Refik’s work on the OLED display is something that must be seen to be understood. There is an organic quality to the art that makes it feel as if a living entity is dancing on the other side of the glass.

The feeling is heightened by the vibrant color of the OLED, which makes the art feel even more alive, like a texture that the viewer can reach out and touch – a window into the mind of a machine.

However, the most immersive experience was being able to explore the mind of a machine themselves by controlling an AI in real time on the Transparent OLED.

“T-OLED (Transparent OLED) is a very much exciting medium, because you can really see through the medium of data, like a holographic experience while you are interacting with an AI”
– Refik Anadol

Beyond these displays was an interactive experience created with an awe-evoking technology – the Transparent OLED.

The Transparent OLED is a device that needs to be seen to be believed.

While somehow maintaining the striking colors of the OLED, the Transparent OLED also allows viewers to peer through the screen.

Refik made terrific use of this technology by creating an interactive exhibit where visitors could use a game joystick to explore the mind of a machine which had been filled with 70 million images of flowers.

By flying through the AI consciousness, viewers could create a flower which, as Refik put it, feels real but doesn’t actually exist.

As the viewer soared through the mind of the machine and explored its consciousness in real time, they were also able to peer through the actual medium of display – an experience which felt holographic in nature.

This is just the beginning of the Artist’s usage of the incredible Transparent OLED. There is currently a stellar collection of artwork being prepared for a near-future release that will surely evoke awe and wonder.

The lifelikeness of the image is something that struck the Artist as well,

“getting the details, clarity, colors, sharpness, and kind of almost touching the data feeling is exactly an OLED technology.”
– Refik Anadol

With Refik’s vast data sets, which use millions of images, every pixel matters, and there is no other canvas which can display excellence down to the pixel better than OLED technology.

Spending time in RAS Studios leaves the viewer feeling suspended between past and future, reality and something far beyond it.

Though the screens don’t show images of anything found in our universe, it’s as though Refik has found a way to distill existence down to its essence.

When we look at the dreams of his machines, we experience a mirror of our own universe.

While Refik says his process is similar to collecting the memories of machines, viewing the artwork feels like we are gazing into collective memories we all share.

There is no clearer window into this inspiring reality than the OLED, which conveys color so striking that the rest of the world seems to fade away.

With future collaborations in mind for the Transparent OLED, the window into Refik’s inspiring universe of imagination will soon appear clearer than ever.

“I’m really grateful for OLED specifically because this quality of experience […] And I do believe this type of art, science and technology collaborations is the future of imagination.”
– Refik Anadol 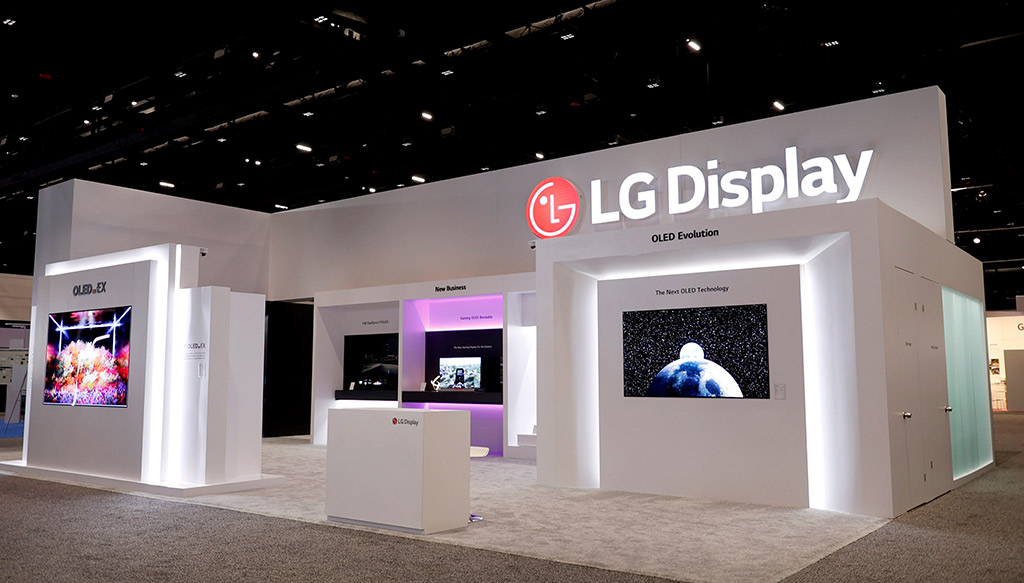